The sunset over Lake Ohrid in the village of Trpeica, near Ohrid, in the southwest of the Republic of North Macedonia Photo: AFP 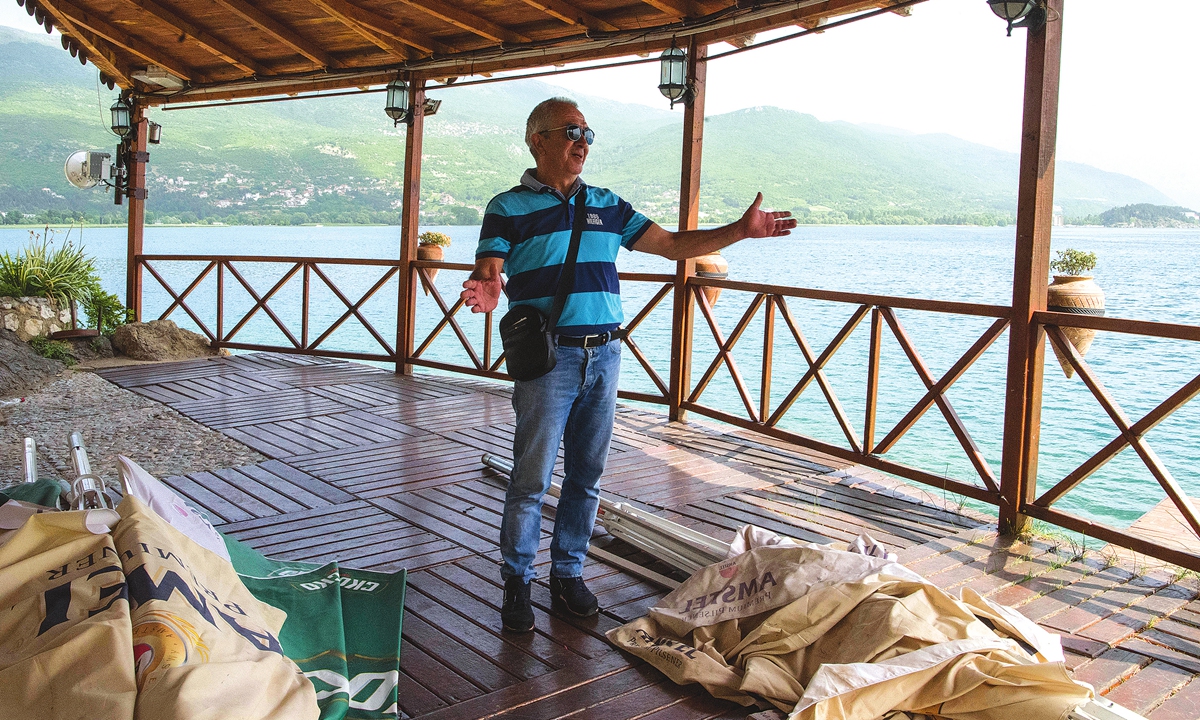 Dimitar Pendoski walks to the end of a rickety alley, bypasses sunbathing youths and picks up a tarp protecting his empty lakeside restaurant, recently closed by officials under pressure from UNESCO.

The government of North Macedonia is working to enforce environmental protection rules and shut down places like the self-built restaurant in Pendoski, to prevent Lake Ohrid from being listed as a heritage site World in Danger of the United Nations Cultural Agency.

“That way everyone loses – the employees, the local economy, and of course the tourists because they have nowhere to go on the beach,” Pendoski told AFP. disputed by environmentalists.

Thanks to its unique flora and fauna, prehistoric ruins and Byzantine churches, Lake Ohrid and its surroundings have been listed as a UNESCO World Heritage Site for four decades.

Only a few dozen places in the world have gained status for both their nature and their culture, a source of prestige for Lake Ohrid – and a major asset in marketing the area to tourists.

But the UN body said the Ohrid region would be put on the “endangered” list at a high-level meeting later in July due to concerns over unchecked urbanization and pollution.

Unless North Macedonia can perform diplomatic miracles, the lake will be cited with such wonders as Australia’s Great Barrier Reef.

Ohrid city mayor Konstantin Georgieski is at the center of a tangle of local and national government bodies tasked with solving the problems.

Its mission is complicated by the international dimension – part of the lake is in Albania, and their leaders also participate in discussions with UNESCO.

But Georgieski does not panic.

“This is not going to mean the end of the world,” he said of the UNESCO decision, stressing that the heritage status does not provide any funding.

“After 30 years of neglect, it is normal that they (UNESCO) lose patience.”

UNESCO first added the North Macedonian side of the lake to its World Heritage list in 1979, expanding the entry to include the Albanian side only in 2019.

During the days of Yugoslavia, Ohrid was a sleepy colony known primarily for its hospitals and as a training center for sports teams.

After the secession of North Macedonia and the disintegration of Yugoslavia in the 1990s, however, tourist developments began to develop along the shores of the lake.

Esplanades, five-story hotels, restaurants and bars have sprung up – and with them came apartment buildings towering a satellite of the Old Town.

Contractors have exploited legal loopholes to build on protected land, often without even connecting to the sewage system.

UNESCO estimates that a third of buildings in the wider Ohrid region pump waste directly into the lake.

“Everything went to hell,” says Nikola Paskali, a dedicated archaeologist who has spent two decades diving on the lake.

Sometimes he searches for Bronze Age relics, but sometimes he hunts for trash – televisions, toilets, and even a full-size abandoned tub are among the items he has pulled from the depths.

“Waste is the cancer of the lake,” he says, accusing the government of doing little to protect biodiversity in a lake that formed over 1.3 million years ago and is home to dozens of unique species.

UNESCO has highlighted issues ranging from illegal construction, logging, as well as fish farms, to river diversions as well as haphazard road construction.

Much of this is underpinned by the region’s desire to become a center for tourism.

“If we started now, it would take years and years to repair the damage we have caused,” says Katarina Vasileska of grassroots environmental group Ohrid SOS.

But cleaning up the lake comes with risks.

Mayor Georgieski recently ordered the destruction of several structures built on the lake that served as makeshift nightclubs and restaurants.

“It’s hard to destroy someone’s property in a small town like ours,” he says. “I am a personal enemy of these people now.”

But he reflects that business owners need to change their mindset, adding: “This is not Ibiza.”

Georgieski envisions a city that hosts sustainable levels of tourists drawn to culture and nature rather than partying.

But UNESCO said in its latest report that restoration work had damaged the “authenticity” of some churches and that the old town’s unique timber-beamed buildings were threatened by uncontrolled development.

Restaurateur Pendoski doesn’t disagree with UNESCO or the mayor, but says it was closed despite obtaining all necessary permits.

“We all share the goal of having more guests while protecting the lake and nature, but there has to be some local economic development,” he says.

Environmentalists, however, argue that pitting economic development against ecological concerns is a false debate.

“We have to keep the lake clean because otherwise we will lose everything, we will lose tourism,” says diver Paskali.

Activist Vasileska also stresses that obtaining permits is not a green light for pollution.